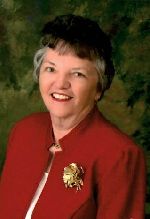 Marilyn Joyce Atkinson, age 76 of Waverly, passed away January 13, 2019. She was born July 30, 1942 in Alhambra, California, the daughter of Elting and Mary (Casey) Headley. She graduated from Upsala High School in 1960. She worked as a telephone operator for several years and briefly attended St. Cloud State University.

Marilyn met Ervin “Erv” Atkinson at the Upsala Feed Mill, and the two were eventually united in marriage on June 26, 1962 at St. Mary’s Catholic Church in Upsala, MN. They were blessed with five children: Timothy (1963), Steven (1964), Patricia (1965-1966), Suzanne (1969), and Michelle (1970). The family lived in Columbia Heights for five years before moving out to a farm in Waverly in 1969. Together they farmed until 2000 and then had an auction sale and retired from farming. While maintaining a household and farm, Marilyn found the time to be active with the Girl Scouts, church activities, and other social events.

Marilyn and Erv traveled in the winter to all the southern states for thirteen years until settling for the winter in Palm Harbor, FL. They met many wonderful people on their travels, and enjoyed playing shuffleboard and bingo. In 2008, Erv was diagnosed with a brain tumor and passed away in 2010.

She attended Single’s Club through St. Mary’s Church in Waverly, and met Jim Matter. The two were joined in marriage on October 10, 2015 and spent 3 wonderful years together. They enjoyed going on cruises, gardening, and spending time with friends. Jim and Marilyn were avid fishermen, and would often compete with each other on who could either catch the most fish or the biggest!

Marilyn is preceded in death by first husband, Ervin; daughter, Patricia; parents; and other relatives.

Funeral arrangements have been entrusted to Chilson Funeral Home of Winsted. Online condolences for the family may be directed to www.chilsonfuneralhome.com