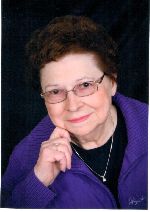 She was born on September 29, 1928 in Victor Township, Wright County the daughter of Paul H. and Sophia (Kieser) Kritzeck.

Marietta was baptized at Holy Trinity Catholic Church in Winsted on September 30th, 1928.

She attended Holy Trinity School in Winsted for six years until her family moved to Buffalo. She graduated from Buffalo High School in 1946. She also graduated from The Business College of Commerce in Minneapolis in 1947.

Marietta was employed as a secretary at Locke Inc.

She moved back to Winsted in 1949 and lived the rest of her life there.

On May 25, 1950, Marietta S. Kritzeck and Vern A. Koch were joined in holy matrimony in Winsted. God blessed their marriage with seven children.

Through the years, Marietta worked in the family’s businesses, Winsted Farm Equipment and K-Way Express.

She enjoyed the family farm near Blackduck. She was a wonderful mom, grandma and great grandma!
She was a faithful member of Holy Trinity Catholic Church in Winsted.

A Mass of Christian Burial for Marietta Koch will be held on Friday, November 11th, 2016 at 11:00 A.M. at Holy Trinity Catholic Church in Winsted. Father Paul Schumacher will be the Celebrant.