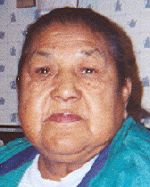 She was born on October 17, 1936 in Sisseton, South Dakota the daughter of Patrick Moses Lohnes and Agnes Isaac-Harris-Lohnes.

Marie was formerly employed as a cook serving meals to the Tribal Elderly. She was a member of The Sisseton-Wahpeton Oyate.

Special music was provided by Rodney Renville and The Red Storm Drum Group.

An all night wake was on Tuesday, September 4th beginning at 7:00 P.M. at The Community Center.

The Chilson Funeral Home in Winsted, Minnesota served the family. Online condolences may be made at www.chilsonfuneralhome.com.