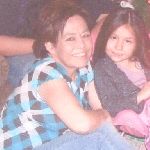 Marie attended Flandreau High School and graduated in 1987. She was active in sports; played volleyball, ran track and participated in the drill team. Marie was interested in education. She attended Bacone College in Muskogee, Oklahoma. Later, she attended The University Center in Sioux Falls. Her goal was to become a counselor and to work to help her people.

Marie was baptized at The First Presbyterian church in Flandreau. She participated in many church sponsored programs and activities as a young girl close beside her grandmother, Marie Allen.

Marie was active in her culture and was named by her grandmother, Marie Allen. Her name was Wahca Waste Win “Pretty Flower Woman”. Marie grew up on the pow-wow trail as a young girl and was a fancy shawl dancer. She enjoyed attending pow-wows and had pledged to dance for her people.
Marie was the mother of two children; Devin Allen Drapeau and Nadine Marie Drapeau. Her children were the most important people in her life.

Funeral services for Marie Drapeau will be held on Thursday, March 24th at 10:00 A.M. at The Eastman Hall in Flandreau, South Dakota. Interment will follow at First Presbyterian Cemetery. Reverend Dave Knutson will officiate. Traditional Spirit Leaders will be Galen Drapeau, Martha Thomas and Patty Thomas.

An all night wake will be held on Wednesday, March 23rd beginning at 7:00 P.M. at Eastman Hall in Flandreau, South Dakota.

The Chilson Funeral Home – Winsted, is proud to have served the family.