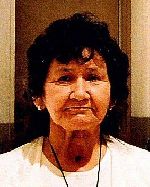 Margaret Mary Sayers, age 68, of Red Lake, MN Journeyed to the Spirit World on Monday, February 24, 2014 surrounded by her family after a long battle with cancer.

She was born on February 16, 1946 in Red Lake the daughter of Paul Sayers and Agnes Lussier.

She attended St. Mary’s Mission School and went on to graduate from Red Lake High School in 1965. Margaret married Jack Thompson in 1977.
Margaret was a homemaker and enjoyed being very active. She will be remembered for having the biggest heart for such a small person.

An all night wake will be held on Wednesday, February 26, 2014 beginning at 1:00 P.M. at the Red Lake Community Center in Red Lake, MN and will continue until the time of service.

Funeral Service for Margaret Sayers will be held on Friday, February 28, 2014 at 1:00 P.M. at the Red Lake Community Center.