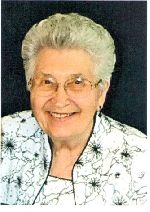 Margaret was baptized and confirmed at St. Mary’s Catholic Church in Waverly, Mn.

Margaret did various jobs around until she met Jerome Thiemann. She waited for Jerome while he served his Country in The Korean War. Jerome came home and they were married on October 6, 1953 at St. Mary’s Catholic Church in Waverly, MN. God blessed their marriage with six children.

A Mass of Christian Burial for Margaret Thiemann will be held on Wednesday, January 4th, 2017 at 10:30 A.M. at Holy Trinity Catholic Church in Winsted. Father Paul Schumacher will be the Celebrant.

Urn Bearer will be Jason Thiemann.