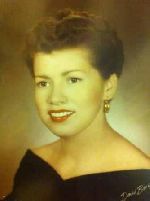 Margaret Ann (Beaulieu) Morgan 76 years old passed away on January 6, 2013. Born October 26th, 1936 to Robert P. Beaulieu and Agnes (Foy) Beaulieu. Margaret attended Haskell Indian Nations where she graduated. After graduation she then moved to Englewood, CA where she met and married Alan Morgan. In 1970 she returned to Redlake, MN to care for her mother and has remained there until 2010. She then moved to Wisconsin to be with her grandson and his family. There she was very well cared for by her daughter-in-law Brooke Beaulieu and Brooke’s sister Brittany, to whom she considered her grandchildren.
Margaret will be very much remembered for her rather extensive walks to the elderly nutrition center where she enjoyed meeting up with her friends to enjoy lunch. She also enjoyed the outings with the elders to places such as: Bingo, Ball games and Pow Wow’s. She was a big fan of the Minnesota Vikings, Twins and most of all the Red Lake Warriors.
Margaret is survived by her daughter, Stacey, 4 grandchildren, Devin (Brooke) Beaulieu of Wisconsin, Sandi (Rick) Porter of Red Lake, Nikiah Gonzales, and Marcelino Gonzales, 7 great grandchildren: Felicia, Wassegonebiik (Mimi), Devin Jr, Jasmine, Romeo, Adrian, and Devonte. Numerous nieces and nephews. Special niece: “Mandy Pandy” Amanda Beaulieu.
She is proceeded in death by, her mother and father, brothers; Robert, James, Ron, Sister; Bonnie, Nieces; Darla, Lucia, Delaney, and Brittany. Great Grandson, Markus Markell Porter.