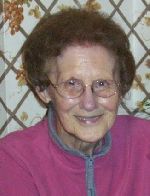 She was born on February 9, 1925 in McLeod County the daughter of Henry & Anna Kohler Artmann.

She enjoyed spending time with her children and grandchildren and volunteering in the community. She was a very kind and loving Christian woman that will be sadly missed by all who knew her.

“Marcie” was a faithful member of Holy Trinity Catholic Church in Winsted. She also belonged to the American Legion Post # 407’s Auxiliary.

Preceded in death by her husband Jack E. Hahn on January 12, 2008, her parents, brothers: Raymond and Albert and by a sister Florence.

A Mass of Christian Burial for Marcella M. “Marcie” Hahn will be held on Saturday, January 4th, 2014 at 11:00 A.M. at Holy Trinity Catholic Church in Winsted. Father Patrick Okonkwo will be the Celebrant.