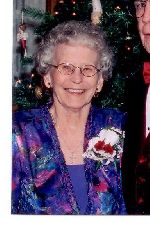 Marceil was born on August 1, 1934 in South St. Paul, Minnesota, the daughter of Charles and Hazel (Shepard) Killinger. She was baptized and confirmed at the First Presbyterian Church, South St. Paul. Marceil graduated from South St. Paul High School in 1953. Marceil and Llewellyn F. (Lew) Buss were married on June 13, 1953 in Mason City, IA. Their marriage was blessed in the Catholic faith on May 27, 1954 at the St. Augustine’s Catholic Church, South St. Paul. They were blessed with five children.

Marceil and Llewellyn were involved in the newspaper business for nearly their entire career, working for the Velva, North Dakota Journal with brother-in-law Jerry Jordahl and the Granville, North Dakota Herald. They owned the Braham, Minnesota Journal, Onamia Independent and the Lester Prairie News. They ran the Lester Prairie News until their retirement in 2000. Marceil was a typesetter for the newspaper and there were none faster. She was a member of the Holy Trinity CCW, enjoyed putting puzzles together, her Dept. 56 Snow Village and spending time with her children and grandchildren.