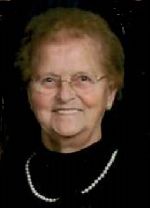 Further visitation will be held on Tuesday morning, April 23rd one hour prior to services at the church.

She was born on December 29, 1935 near Watertown, Minnesota on her family’s farm the daughter of Walter C. & Lydia (Lemmerman) Lange.

Malvina was baptized on January 16, 1936 by The Reverend Karl Rudolph. She was also instructed in the Lutheran Catechism and confirmed in the Christian faith on April 10, 1949 at St. Peter’s Lutheran Church in Watertown Township by The Reverend John Spomer.

On July 21, 1954, Malvina D. Lange and Gordon K. Dalbec were joined in holy marriage at St. Paul’s Lutheran Church in Watertown by The Reverend John Spomer. God blessed their marriage with four children.

She was a faithful member of St. James Lutheran Church in Howard Lake.

Malvina formerly worked for Dr. Thal DVM as a Vet Tech in Watertown, Red’s Café in Montrose, Dr. & Mrs. Zierold in Wayzata, Green Giant in Winsted and Glencoe, Casey’s in Winsted, Marketplace in Cokato and drove school bus for thirty-eight years. She started driving school bus in Delano for Stahlke Bus Service in 1966 and when they moved to Howard Lake in 1968 Malvina drove school bus for Howard Lake -Waverly-Winsted and retired from the School District in April of 2004. After she retired from driving bus she worked at The Adult Training Center in Winsted and retired in March of 2008.