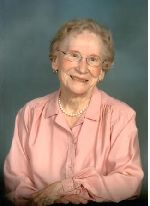 Age 97, of Winsted, passed away February 21, 2016 at the Good Samaritan Society in Howard Lake.

Magdalen Sophie Remer was born March 17, 1918 in rural Winsted, the daughter of Frank and Catherine (Lachermeier) Remer. In 1923 they moved to the family farm, and she lived there until her marriage.

On June 27, 1939 Magdalen Remer and James Campbell were joined in Holy Marriage at Holy Trinity Catholic Church in Winsted. God blessed their marriage with eight children.

Magdalen was baptized and confirmed in her faith at Holy Trinity Catholic Church in Winsted. She had a strong faith and prayed the rosary daily.
As a young girl, Magdalen helped at the Sterner Farm. Later she worked for her aunt at a grocery store in the cities, worked for Green Giant and worked for Tonka Toys. She enjoyed dancing, traveling –including Germany and Scandinavia, gardening, canning, socializing, card playing, knitting, and sewing. She was a great wife, and kind and loving mother who always put her children first.

Mass of Christian burial will be held Wednesday, February 24, 2016 at 11:00 AM with visitation starting at 9:30 AM at Holy Trinity Catholic Church in Winsted. Father Tony Stubeda and Father Paul Schumacher will be celebrants. Interment at Holy Trinity Cemetery in Winsted.

Serving the family is the Chilson Funeral Home in Winsted (320-485-4447) www.chilsonfuneralhome.com