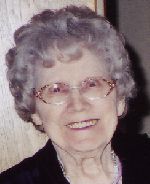 She was born on March 1, 1915 in Winsted Township, McLeod County, the daughter of Lawrence E. & Mary Bayerl Kegler.

Mr. & Mrs. Bebo engaged in dairy farming for many years.

She was a faithful, lifelong, member of Holy Trinity Catholic Church in Winsted and belonged to the C.C.W.

A Concelebrated Mass of Christian Burial for Magdalen Bebo was held on Monday, July 6th at 10:30 A.M. at Holy Trinity Catholic Church in Winsted. Interment followed at Holy Trinity Cemetery.

A visitation was held on Sunday, July 5th from 4-8 P.M. at The Chilson Funeral Home in Winsted. A Rosary was recited at 4:30 P.M. and a Parish Prayer Service was held at 7 P.M.