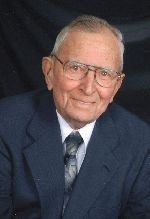 He was born on February 9, 1926 at home in Winsted Township, McLeod County the son of Clemens & Martha (Bisping) Otto. He was the youngest of nine children.

On June 20th, 1953, Austin Otto and Mariann Hausladen were joined in holy marriage. God blessed their marriage with five children.

Austin honorably served his Country in the United States Army from 1954 – 1956.

Farming was his lifelong passion!

Austin was very civic minded. He was instrumental in having School District # 42 merge with Lester Prairie Schools. Austin was an original board of director that began St. Mary’s Hospital. He also served on the McLeod County’s original Soil Conservation Service.

Austin was a lifetime, faithful member of Holy Trinity Catholic Church in Winsted. He taught religious education until he was 85 years old. Austin received the Bishop’s Medal of Service in 2000 from the New Ulm diocese. He belonged to the Knights of Columbus Council # 8253.

A Mass of Christian Burial for Austin Otto will be held on Monday, January 13th, 2020 at 11:00 A.M. at Holy Trinity Catholic Church in Winsted. Father John Laurance, S.J. will be the Celebrant. Alice Nowak will be the organist for the funeral Mass and Sandy Otto the soloist.

Memorials may be made to Holy Trinity Educational Trust Fund.