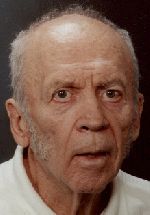 He was born on August 25, 1932 in Lake Lillian, Minnesota the son of Earl & Mildred Peterson Rubel.

On September 20, 1952, Lyndon Rubel & Laurene L. Cervin were joined in holy marriage at The United Methodist Church in Litchfield.

Mr. & Mrs. Rubel engaged in farming in Stockholm Township, Wright County, for many years. In addition, “Lindy” was a well known area auctioneer.

“Lindy” enjoyed telling jokes, deer hunting, traveling and playing cards. He was very much a “people” person and was always optimistic. He was also willing to help others especially his neighbors. “Lindy” had an avid interest in politics.

He was a faithful member of Stockholm Lutheran Church, rural Cokato. Lyndon formerly served on the school board of rural Stockholm school and was a former church council member.

Preceded in death by wife: Laurene Rubel in 1981 (at the age of 47 years), an infant son: Wilbert Earl Rubel in 1958, his parents, an infant brother: Donnie Rubel and by a brother: Perry Rubel.