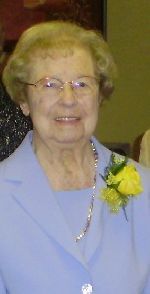 On an Easter day, April 16, 1911 a daughter was born to Charles & Magdalene Noerenberg Narr Luedke in Hollywood Township, Carver County.

She was baptized at St. Johns Lutheran Church in Hollywood Township on May 7, 1911 by Reverend Theo Rolf. She attended Hollywood Parochial school and was confirmed May 17, 1925 by Reverend W.L. Ernst.

On June 21, 1932 Luella was united in marriage to Wallace Hecksel by Reverend Theo Rolf at St. Johns Lutheran Church in Hollywood near New Germany. Their marriage sermon bible text was The Lord’s Prayer. God blessed their marriage with two sons and four daughters. After farming in Hollywood Township for seven years, they moved to The Hecksel homestead farm east of Winsted. They transferred their membership to St. John’s Evangelical Lutheran Church in Winsted in 1944.

The celebrated their 50th wedding anniversary in June of 1982.

She was a faithful member of St. John’s Evangelical Lutheran Church in Winsted and also belonged to its Ladies Guild.

Luella enjoyed traveling, her flowers, gardening, cooking, baking and visiting with family and friends. She especially enjoyed visiting with the people who delivered Meals on Wheels. She was able to live in her house up to the age of 101 before going to St. Mary’s Care Center.

Luella was preceded in death by her parents: Charles & Magdalene Luedke, husband: Wallace on July 18, 1983, a daughter: Opal Schwichtenberg on April 9, 1991, a sister: Cordella Lemmermann on February 12, 1969, four brothers: Clarence, Edwin, Rueben and Fred all in 1999, a step brother: Walter Narr in 1952 and two infant brothers: Raymond & Herbert.

Special music will be provided by Bruce Gatz and he will sing “Our Father”. Congregational hymns will be “Beautiful Savior and “Abide with Me”.

A visitation will be held on Sunday, July 21st from 12 Noon until 2:00 P.M. at St. John’s Lutheran Church in Winsted.