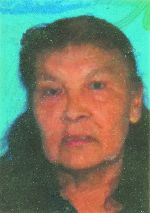 Lucille Eleanor Anderson, Bug O KWE age 71, of Red Lake, Minnesota journeyed to the Spirit World on January 4, 2020 at the U of M Hospital in Minneapolis, Minnesota. She was born the daughter of Charles Anderson and Eliza May and grew up in Red Lake, Minnesota. Lucille went to college at Bemidji State where she received a B. A. degree as a social worker. She worked as a Social Worker for the Red Lake Nation Family and Children Services and for the Red Cross in Minneapolis. Lucille enjoyed going to the casino, playing Keno was her favorite. Family and friends were everything to Lucille! She was raising a special grandson J.T., they did everything together. She enjoyed cross country skiing.

Preceded in death by her parents: Charles and Eliza; brothers: Herbert May, Leslie Anderson and Charles Anderson; grandparents: Cora and Antoine May.

An all-night visitation will be held on Wednesday, January 8, 2020 beginning at 5:00 PM continuing until the time of service on Friday, January 10th, 2020 at the Little Rock Community Center in Red Lake, Minnesota.

Funeral services for Lucille will be held on Friday, January 10, 2020 at 10:00 AM at the Little Rock Community Center in Red Lake, Minnesota.

Casket Bearers will be Ed Jourdain, Todd Anderson, Will May, John Jourdain, Robbie Anderson, Sam Roy and all her nephews.

Interment will be at St. Mary’s Catholic Cemetery in Red Lake, Minnesota