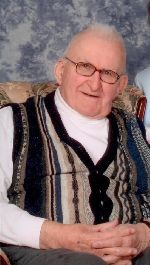 Lowell Carl Tesch, age 86, of Winsted, MN, passed away on Wednesday, October 6, 2010, at the Hutchinson (MN) Hospital. He was born on April 9, 1924, in Mayer, MN, to Carl and Florence Tesch. He grew up in the Mayer area and attended Mayer public school.

On October 17, 1970, Lowell was married to Shirlee Schafer at Zion Lutheran Church in Mayer.

Lowell did various manual labor jobs including farming, hauling milk, and butchering. He also worked in the warehouse at Bongards Creamery (St. Bonifacius, MN) until he retired. After retirement he was custodian of Mayer Lutheran High School and Mayer Zion Church, and was also custodian at Minnetonka (MN) Schools for 5 years.

Lowell and Shirlee had the privilege of traveling to Germany, the west coast, South Carolina and fishing trips to Canada. Lowell enjoyed gardening and painting ceramics.

We rejoice that the Saviour has called him home to Himself, free from pain and stresses of the body.

Funeral services for Lowell Tesch will be held Saturday, October 9, 2010, at 11:00 AM at St. John’s Evangelical Lutheran Church in Winsted.