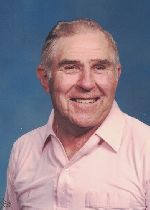 He was baptized as an infant and later confirmed in his faith in 1941 at the Trinity Lutheran Church in Willow Lake Township.

Louis worked throughout his youth on the family farm while receiving his education at the country school.

Louis was drafted into the United States Air Force near the end of World War II.

Following his honorable discharge, he returned home and worked for two years as a farm hand for extended family, Irvan and Blanche Kruse. He also worked for more than 12 years at the Wanda and Wabasso Creameries. Upon their closures, Louis relocated to Minneapolis where he worked for the YWCA in maintenance for a number of years. He was later hired as a custodian within the Richfield Public School District, where he retired after 23 years.

On June 18, 1966, Louis was united in marriage to Janice Lynn Mattson at Trinity Lutheran Church in Willow Lake Township, Minnesota. This marriage was blessed with a daughter, Mary Jo.

Louis and Janice lived in Richfield, Minnesota until his retirement, and then relocated to Winsted, Minnesota to be closer to his daughter and grandchildren.

Louis always brought a smile and laughter to everyone he knew. He will always be remembered for his patience, kindness, and unconditional love.

Louis passed away peacefully on Friday, July 26, 2019 at Harmony River Living Center in Hutchinson, Minnesota, at the age of 91.

Blessed be his memory!

Louis is survived by his daughter, Mary Jo (Kruse) Horstmann; grandchildren, Kristin and Ryan Horstmann; brother, Delbert Kruse; and many other friends and family.