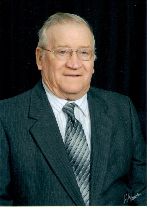 A PRAYER SERVICE WILL BE HELD AT 7:00 P.M. SUNDAY EVENING.
FURTHER VISITATION WILL BE HELD ON MONDAY AT THE CHURCH ONE HOUR PRIOR TO SERVICES.

Lorren Eugene Glessing was born on March 8, 1928 on the family farm in Victor Township, the son of Henry and Emma (Zech) Glessing. He was the youngest child of their seven children.

Lorren attended Rice Lake School until 7th and 8th grades when he attended St. James Lutheran School. He then attended Howard Lake Public School until the age of 15 when he began to farm full time on the family farm.

On June 9th, 1951 he was united in marriage to Jeanne Wills. Their marriage was blessed with two children Neal and Dawn.

As a member of St. James Lutheran Church in Howard Lake, he served as an usher, an elder and on the Stewardship Board.

Lorren enjoyed every aspect of farming especially his dairy herd. He took great pride in taking care of God’s soil and animals.

In June of 2015, Lorren entered the Howard Lake Good Samaritan Care Center. It was there on September 15, 2016, that he was called to his eternal rest having reached the age of 88 years, 6 months and 7 days.

He was preceded in death by his parents Henry and Emma Glessing, four brothers Warren, Omar, Howard and Maurice, two sisters, Mabel Sherva and Eva Handrich.