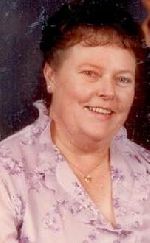 She was born on June 5, 1935 to Ida (Erdman) and Andrew Quast. She attended Holy Trinity Elementary School and graduated from Howard Lake High School.

On October 3, 1953 she married Gaylen Cochran. Five children were born to this marriage; Steven, Kris, Daniel, Kathy and Larry. Gaylen was killed in a car accident on December 16, 1965. Lorraine then married DeWayne “Pete” Peterson on June 14, 1968. She moved with the children to the Oster, MN area. Pete passed away on November 25, 1995 of heart trouble. Lorraine was proud of the fact that she worked with St. Mary’s Care Center for 31 years.

She was preceded in death by her parents, husbands Gaylen Cochran and DeWayne “Pete” Peterson and by a daughter-in-law Lisa Cochran.

Visitation for Lorraine Peterson will be held at Chilson Funeral Home from 11:00 AM till time of service on Saturday, April 23, 2011.