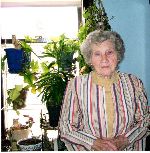 Loretta Sophie (Fiecke) Thiesen was born on March 31, 1931 the daughter of Joseph & Anna (Kieser) Fiecke. Her ancestors left Germany to come to America and settled around the City of Winsted.
Loretta grew up in a family of 11 children ( 4 girls and 7 boys). All of the children had to work in the fields from the oldest to the youngest. There was plenty of food on the table because of the big garden that was planted.
Loretta was united in marriage to Raymond Thiesen on June 28, 1950 at Holy Trinity Catholic Church in Winsted. The couple resided on their farm west of Winsted. They were blessed with two children John and Julie. Ray and Loretta shared 49 years of marriage before Ray passed away on May 3rd, 1999. She enjoyed flowers, gardening, canning, baking, movies and going to garage sales. Loretta also loved cats and dogs.
Loretta passed away on Thursday, February 16, 2017 at the age of 85. Blessed be her memory!
Survived by a son: John Thiesen; a daughter: Julie Thiesen; brothers: Francis (Joan) Fiecke and Alphonse Fiecke all of Winsted; other relatives and friends.
Preceded in death by her husband: Raymond Thiesen, her parents, sisters and brothers Mary, Ben, Eugene “Gene”, Joseph Jr., Leona, Agnes, Henry “Hank” and Clemens.
A Mass of Christian Burial for Loretta Thiesen will be held on Tuesday, February 21st at 11:00 A.M. at Holy Trinity Catholic Church in Winsted. Father Tony Stubeda will be the Celebrant. Interment will follow at Holy Trinity Cemetery.
A visitation will be held on Tuesday morning, February 21st beginning at 9 A.M. until time of Mass at the Church.
Casket Bearers will be Allen Fiecke, Roger Horstmann, Tom Fiecke, Stanley Horstmann, Stephen Fiecke and Paul Fiecke.