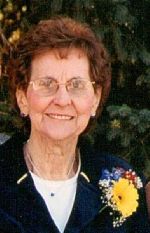 Visitation Information
AT THE CHURCH
Thursday, September 19, 2013
beginning at 9:30 A.M.

Mass of Christian Burial on Thursday, September 19, 2013 at Holy Trinity Catholic Church, Winsted, MN at 11:00 AM.

Loretta was born on November 2, 1930 in Winsted, MN to Herman & Clara (Neumann) Scheiber. She married Kenneth Lee on June 14, 1952 in Winsted, MN. They farmed near Litchfield, MN for 20 years. Together they had a vegetable garden for many years & in their later years, they enjoyed a flower garden. Loretta retired from Edco Products. Loretta truly enjoyed her children, grandchildren & great-grandchildren.