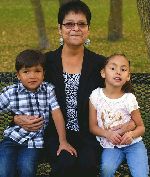 Lorae Denise Lufkins – Mercado, “WA-A – Wacin Win (Thoughful Woman) age 56, journeyed to the spirit world on November 23rd, 2019 in Soux Falls, South Dakota. She was born on May 24th, 1963 the daughter of Naomi (Renville) Lufkins and Kenneth Lufkins. She attended school at Peever Elementary, Sisseton middle school. Lorae and her sister Lavonne attend Job Corp in Utah. She moved to Minneapolis, where she work for a number of years. In 1994 she and her family moved back to Sisseton, South Dakota, where she worked for over 18 years and then she worked for the SWFCU.

Lorae was a very thoughtful, hard working women. She attended college at Sisseton Wapheton Community College while working and completed her degree in Business Administration. She enjoyed visiting, playing cards, watching the walking dead, and spending time with family and friends. Her grandchildren were the center of her world. She planned her adventures around Lanay (Crusters) and Antonio (Twon). Lorae lived a very full and fun life.

An all-night visitation will be held on Tuesday, November 26th, 2019 beginning at 7:00 P.M. at the Sisseton Wahpeton Oyate Community Center in Old Agency Village, South Dakota.

A funeral servive will be held on Wednesday, November 27th, 2019 at 2:00 P.M. at the Sisseton Wahpeton Oyate Community Center in Old Agency Village, South Dakota.

The Pianist will be Billy Kohl.