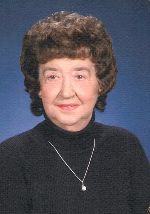 Lois Kathleen Schmidt, age 84, of Cokato passed away on Thursday, April 17th, 2014 at The Buffalo Hospital.

She was born on April 3rd, 1930 in Maple Lake the daughter of Emery & Hildegard Wurm Starkey.

Lois was formerly employed at General Mills and at Lakedale Telephone Company. She enjoyed playing bingo and spending time with her family.

A Mass of Christian Burial for Lois Schmidt will be held on Monday, April 21st at 11:00 A.M. at St. Mary’s Catholic Church in Waverly. Father Kenneth O’Hotto will be the Celebrant. Interment will follow at Woodlawn Cemetery in Annandale.