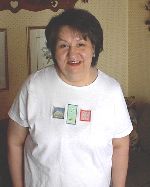 She was born on November 28, 1948 in Hayward, Wisconsin the daughter of Raymond “Rex” & Bessie LaPointe Mayotte.

She was a member of The Bad River Band of the Lake Superior Tribe of Chippewa Indians. Lois attended St. Mary’s Grade School in Odanah and graduated from Ashland High School in 1966.

In 1969, Lois and her husband James moved from Minneapolis, Minnesota to Hutchinson, Minnesota.

She attended and graduated from Ridgewater Technical College in Hutchinson where she also served as The Student Senate President.

Lois was an ordained Minister and frequently spoke at Christian Conventions. She also spent years on reconciling various Native issues here in the State of Minnesota with both Tribal and State Governments.

She enjoyed reading, writing, was an accomplished oil painter and was a great cook and baker.

Preceded in death by her parents, a brother Warren Mayotte and by a sister: Norma Mayotte Conners.

Funeral services for Lois Ann Deragon will be held on Friday, April 27th at 11:00 a. m. at the Bad River Community Center in Odanah, Wisconsin.

Interment will follow at Odanah Cemetery on the Bad River Reservation.

A wake will be held on Thursday, April 26th beginning at 5:00 P.M. at the Community Center.

Firekeeper will be Andrew Mayotte.

The Chilson Funeral Home in Winsted, Minnesota is serving the family. Online condolences may be made to www.chilsonfunerlahome.com

Leave a Reply to Gerry and Linda Moss Cancel reply