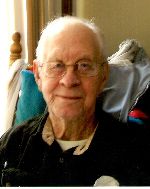 He was born in Montrose, MN on May 17, 1920 the son of Gerhard (Jerry) and Anna (Yost) Butterfass. He was baptized on June 13, 1920 and was instructed in the Lutheran Catechism and confirmed in the Christian faith on August 5, 1934 at St. Paul’s Lutheran Church, Montrose, MN. On May 6, 1945 he married Esther Koch at St. Paul’s Lutheran Church, Montrose and they were blessed with five children.

Lloyd was primarily a farmer and a “jack of all trades” who enjoyed carpentry, playing cards, dominoes and checkers. He especially enjoyed dancing with Esther. Ice fishing was among one of his favorite past times when time allowed. He often spoke fondly of ice skating in his younger days on the Crow River.

He is preceded in death by his parents, a son Edward Butterfass, infant daughter Harriet Butterfass, brothers, Elroy Butterfass, Harold Butterfass and Donald Kliche (brother-in-law) and many other relatives.

Funeral services for Lloyd A. Butterfass will be held at 10:00 AM on Saturday, December 21, 2013 at St. James Lutheran Church in Howard Lake.

Interment will be at the Dutch Lake Cemetery, Howard Lake Minnesota.