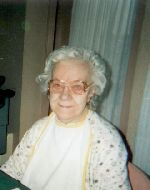 Lillian was born on August 23rd, 1924 the daughter of Emil and Theresa (Juncewski) Ruzicka in Silver Lake, MN. She was baptized and confirmed
at St. Joseph’s Catholic Church in Silver Lake, MN, and later confirmed and Baptized in the Lutheran Faith at St. Peter’s in Lester Prairie, MN.

Lillian was united in marriage to Hilton Tonn on October 9th, 1957 in St. Peters’ Lutheran Church in Lester Prairie, MN; their union wasblessed with a daughter.

The Chilson Funeral Home of Winsted is proud to have served the family…
WWW.CHILSONFUNERALHOME.COM