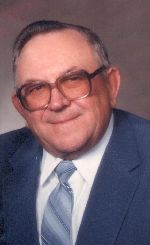 He was born on July 28, 1926 in Silver Lake Township, McLeod County the son of Anton & Peggy (Pokornowski) Rozeske.

Leonard and Irene farmed S.W. of Winsted for many years. He also was a feed salesman, drove a van for Howard Lake-Waverly Special Ed children, sold monuments and also worked for Lester’s for twenty plus years.

Leonard was a faithful member of Holy Trinity Catholic Church in Winsted. He also belonged to The Knights of Columbus Council # 8253, Winsted American Legion Post # 407, the V.F.W. and was a volunteer at St. Mary’s Care Center. Leonard and Irene also delivered meals on wheels and were in charge of Legion bingo.

Preceded in death by his parents, three brothers and by two sons: Gary and Bob.

A Mass of Christian Burial for Leonard F. Rozeske was held on Monday, October 27th at 11:30 A.M. at Holy Trinity Catholic Church in Winsted. Father Paul Schumacher was the Celebrant.

A visitation was held on Monday, October 27th from 9:00 A.M. until time of Mass at the church.

The Chilson Funeral Home in Winsted served the family. Online condolences may be made to www.chilsonfuneralhome.com