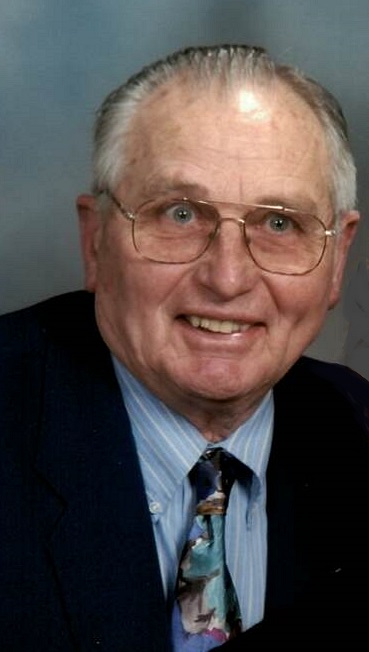 Leo A. Guennigsman, age 93, of Stockholm Township, Minnesota, suddenly and peacefully entered eternal glory, with his daughter by his side on Friday, October 8, 2021.

He was born on March 20, 1928, in Howard Lake, Minnesota the son of Albert and Mathilda “Tillie” (Helmbrecht) Guennigsman. He grew up on a farm northwest of Winsted.

Leo graduated from Holy Trinity in Winsted, MN. After school, he started farming with his parents on their Victor Township dairy farm. In 1941, his dad, a group of men and Leo, being only thirteen, helped build the family dairy barn. In 1945, Leo, his dad, and a few others, built the house he and his wife moved into after having their 3rd child and where they lived until retirement. They sold the dairy farm to a son, moved into another house they owned about a mile away, continued crop farming, and where you could find Leo in the fields with the backhoe making improvements, as recently as this year until the crops were planted.

May 4, 1950, Leo A. Guennigsman and Jeanette M. Kunkel were joined in holy marriage at St. Timothy Catholic Church in Maple Lake. God blessed their marriage with 6 sons and 2 daughters. Jeanette passed away in 2012, giving them over 62 blessed years together.

Leo was mostly self-employed and enjoyed combining for neighbors. He was formerly employed at Millerbrends, Dahlco Seeds doing fieldwork and driving seed truck making deliveries to nearby states, and other.

Leo was a faithful and active member of Holy Trinity Catholic Church in Winsted, where he was baptized in 1928 and confirmed in 1936. He was a Sunday usher and served on other church committees. He was a member of the Catholic Order of Foresters Local Court # 1054 of Winsted and was the Chief Ranger, intermittently, for 43 years. Leo received the Merit, Legion of Honor and Fraternalist of the Year Awards. He was a strong leader of the annual Palm Sunday Chicken Dinner Matching Funds fundraiser.

Leo held various other roles in the following societies: Sumter Mutual Insurance Company for over 15 years. Civic & Commerce as a President and Vice President, served on the Winsted Public School Board, Wright County Farmers Union President, and Stockholm Planning and Zoning Board member for 25 years.

He will be remembered for his loving devotion to his family, dairy and crop farming, service within the church and community, and a strong work ethic. He loved playing cards, Farkle, family gatherings, traveling, dancing, polka and country music, fishing trips with friends and family, and attending social events. In 1965, Leo and a group of friends started an annual fishing trip to Canada, all preceded him in death, except one. In the early 1990’s, he went on family vacations up north and started an annual fishing trip to a resort with family of whoever could make it that year, which continued through this year. He was the best fish fryer.

Leo made friends with people everywhere he went. He could easily strike up conversations with about anyone. He enjoyed, nearly daily, early morning coffee with friends.

A visitation will be held Sunday, October 17th from 4 to 7 P.M. at Chilson Funeral Home in Winsted. Catholic Order of Foresters rosary will be recited at 6:00 P.M. and parish prayers at 6:30 P.M.

Further visitation will be held at the church Monday morning, one hour prior to Mass.

Urn Bearer will be Kyle Guennigsman.

A private family viewing and prayer service was held on Sunday, October 10th.

The Chilson Funeral Home in Winsted is serving the family. Online condolences may be made to www.chilsonfuneralhome.com.