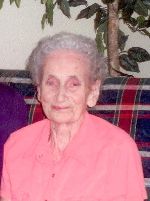 She was born on June 16, 1920 in Waverly the daughter of Joseph G. & Annabelle P. Kanhel Schultz.

She is a faithful member of Holy Trinity Catholic Church in Winsted. She also belonged to St. Anne’s Society.

Preceded in death by her husband: Andrew Entinger, her parents: Joseph & Annabelle Schultz and by an infant son: Kenneth Entinger.

A Mass of Christian Burial for LaVerne Entinger will be held on Friday, August 20th at 11:00 A.M. at Holy Trinity Catholic Church in Winsted. Father Tony Stubeda will be the Celebrant.

A visitation will be held on Friday, August 20th two hours prior to Mass AT THE CHURCH.