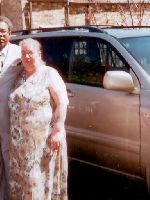 She was born on September 11,1960 in Topeka, Kansas the daughter of Donald E. & Carolyn Hunsucker LaFontaine.

A visitation will be held at the Bradshaw funeral home on Sunday, May 8th from 10:00 A.M. till time of service.