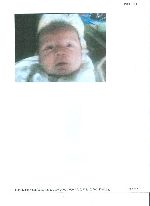 LaShawn Scott Brownotter was born February 9, 2010 at St. Alexis Medical Center in Bismarck, North Dakota to Ronald Brownotter and Rachel Middletent. His life was short but he will be greatly missed by his whole family. He holds a very special place in all of our hearts. He was taken too soon from all of us. He entered the spirit world on April 20, 2010 at Mid Dakota Medical Center, Chamberlain, South Dakota. There will be two nights wakes held at the St. Joseph’s Catholic Church on Saturday and Sunday and the funeral services will be held on April 26, 2010 at 10:00 A.M. at St. Catherine’s Church, West Bend, South Dakota.

The Chilson Funeral Home of Winsted, MN is proud to have served the family.