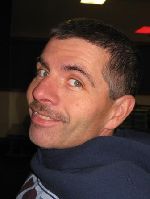 Kevin Donald Vetsch (“Eddie”), was born December 18, 1963, the youngest of six to Lloyd & Joan (Schlagel) Vetsch in Buffalo, MN. He attended school in Saint Michael, Howard Lake, and Hibbing. He graduated from Howard Lake-Waverly High School in 1982. He then attended Anoka Technical College where he received his electricial training. He worked for Muska Electric and was a 27 year member of IBEW 292. He was also a member of St. Mary’s Church in Waverly.

Kevin married Teri Stokes on March 19, 1994. They were blessed with two amazing children, Alexa and Colton.

Kevin enjoyed being an electrician and had a very strong work ethic but never put work ahead of his family. He enjoyed working around his home, visiting with friends, fishing, boating, an ice cold Pepsi, family road trips, Easter egg hunts, bowling, traveling to new states, strategizing fantasy football and baseball teams with his kids, going to Twins games and following Minnesota sports teams. He enjoyed joking around with others and making them laugh. He was truly a kid at heart. Kevin was a very gentle, caring and kind hearted person who would help anyone who needed it. He always put others first. He was very proud of his kids and enjoyed every minute spent with them. His family was truly the light of his life.

Kevin passed away at St. Mary’s Hospital in Rochester, MN on December 19, 2012. He had reached the age of 49 years and one day.

Kevin will be welcomed into heaven by his father, Lloyd; brother, Keith; brother-in-law, Jim Hirsch; and father-in-law, Bill Stokes. He is survived by his wife, Teri, and children, Alexa and Colton of Cokato. Mother, Joan (Matt) Tholkes of Buffalo. Brothers, sister and sister in laws; Brian (Marilyn) of Monticello, Bruce (Bonnie) of Elk River, Bill (Pat) of St. Michael, Brenda (Curt) Steurer of Elk River and Julene Hirsch of Howard Lake. Also survived by in-laws, Shirley Stokes, Dan Stokes and Kevin (Kelly) Stokes all of Howard Lake. He is survived by 19 nieces and nephews and many other family members and friends. He was an amazing friend, husband and father and will be forever missed by many, many people!

In lieu of flowers, memorials preferred to the family.