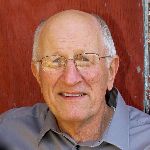 Kenneth Louis Bayerl, age 74, of Winsted passed away on July 14, 2017 peacefully in his home surrounded by his family after a courageous battle with pancreatic cancer. He was born on October 29, 1942, at his home in Winsted, the son of Frank and Mary (Artmann) Bayerl. On April 4th, 1964, Kenneth L Bayerl and Sandra L Fasching were joined in holy marriage at Holy Trinity Catholic Church in Winsted. God blessed their marriage with two daughters. He was a faithful, lifetime member of Holy Trinity Catholic Church of Winsted and attended Holy Trinity Catholic School. Ken honorably served our country in the US Army Reserves. He was a member of the Knights of Columbus. Ken worked at Lester’s Inc. and then was a manager at Poly Foam. Ken then started farming, which was his true passion.
After retirement he worked with Larry Vealetzek and this is where he was finally able to pursue his favorite hobby, woodworking. Ken was able to create and build anything he had a picture of and/or measurements. His favorite things were winters in Texas, coffee with friends and brothers at the Blue Note, camping (with morning walks meeting new people and making sure all their campers were level), golfing, fishing and four wheeling. Most of all he enjoyed spending time with his family and friends.
Ken is survived by his loving wife and companion of 53 years Sandy Bayerl; Children: Lynn (Kevin) Benz of Eagan, Lori (Rocky) Dehmlow of Shakopee; Grandchildren Caleb and Claire Benz, Max and Elise Dehmlow; siblings: Raymond (Carol) Bayerl, Donald (Jane) Bayerl, James (Doris)Bayerl, Rosemary Weber, Janet (Jim) Johnston, Robert (Jane) Bayerl, Melvin (Jenny) Bayerl, Clemens (Diane) Bayerl, Mary Jane (Glenn) Ehrke, Shirley Lefebvre, Ann (Floyd) Fenske; Sister in Law Carol (Bruce) Hertzog; many nieces and nephews.
Preceded in death by his parents Frank and Mary (Artmann) Bayerl and Baby Sister; Father and Mother-in law Isidore “Spoke” and Elderine Fasching; Brother in laws, Melvin Schroeder, Charles Weber; Sister in law, Jeanette Bayerl; nephew, Paul Fenske.

In lieu of flowers, donations may be made to the American Cancer Society or donor’s choice.