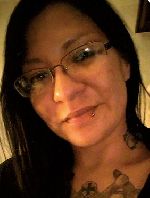 KarenFawn (Lufkins) Taylor, “Mah pi ya Ihdu ha Win” (Sky Keeps it Self Woman), age 31, of Watertown, SD journeyed to the Spirit World in the morning of Tuesday, May 7, 2019.

She was born on May 15, 1987 in Watertown, SD the daughter of Mary (Genia) Goette and Timothy J. Lufkins. She is the third child born, the youngest daughter.

KarenFawn grew up her young years in Long Hollow, Where we lived next to the Seaboy’s there she made the best friendships that lasted into her adult years.
In 1992 her mother met Mike Goette they later married. Mike received her as his daughter when he adopted the children, she received a Daddy!
Throughout junior high and high school she played the flute and the clarinet in band. She enjoyed all kind of music but her favorite when she was a young girl was classical. As she grew to young adult she began to Love the Drum and Dancing Fancy Shawl and turned to Jingle Dress as well. She was a cross country runner, involved in gymnastics, ballet and a cheerleader throughout her school years.

Karen was chosen to be the Tribal Princess in 2003 when she was 16 as the Tribal Princess, she traveled the whole North American Continent. It was during these times of traveling and enjoying her culture that she really enjoyed, being with Pow-Wow Family. Karen was shy but if you got to know her, she is energetic, fun loving, honest and loyal to the people she held close. As her interests grew she loved to fish, hunt and going to construction jobsites with her Daddy.
After High School graduation, Karen attended Sisseton Wahpeton College where she was crowned the College Princess. When her younger brother, Micah, graduated from high school, they both moved to Watertown where she attended National American University, studying Business Administration/Accounting, all while working full time at the Days Inn Hotel.

While in Watertown, she met and married Kevin Taylor on September 17, 2016 in Haiti, SD. Together they enjoyed Harley Davidson motorcycle riding, going to auctions and having a booth at the Peddlers Market & Dining out, also taking all the children out fishing and picnicking. She Loves her children and was a mother to her nieces and nephews before she had her own children. They all continue to be her children as they grew up.

Funeral service for KarenFawn Taylor will be held on Monday, May 13, 2019 at 2:00 pm at the First Presbyterian Church in Sisseton, SD. Pastor Lamar Whittemore, Pastor Abigail Ozanne, Danny Seaboy Sr. and John Cloud III will officiate. She will be laid to rest at the Long Hollow Presbyterian Church Cemetery.
Funeral procession starts on Saturday May 11, 2019 at 5:00 pm east of Browns Valley, MN at the wayside rest area, then on to the Lake Traverse District Center. An all-night wake will be held on Saturday, beginning at 7:00 pm & on thru Sunday, May 12, 2019 10:00 pm
Funeral will be held at the First Presbyterian Church in Sisseton, SD at 2:00 pm with visitation hour before services.

Chilson Funeral Home, Winsted, MN served the family. On-line condolences can be made at www.chilsonfuneralhome.com