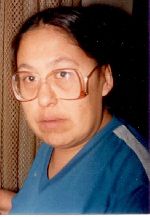 Juanita grew up at the Feather Homestead in Big Coulee, Peever, South Dakota. She attended grade school at the Big Coulee Day School and High School at The Flandreau Indian School.

Juanita was a very quiet, caring person. She had many friends and her home was always open to anyone who came to visit.

Juanita’s fulltime job was caring for and raising her children and the children of many of her friends. She baby sat many children in this community. Juanita was an Elder for The Ascension Church of Big Coulee. Juanita also served as the Secretary for the Tribal Elderly Board.

When not caring for children, Juanita loved to play bingo.

She was preceded in death by her parents: Gordon and Florine (Feather) Owen, two sisters: Christine Owen Wanna and Winifred Owen, her maternal grandparents Silas and Lillian (DeCoteau) Feather, her paternal grandparents Howard and Lydia (Bernard) Owen and a nephew: Shane Owen.

Pianist will be Billy Kohl.

Arrangments for Juanita Owen are by The Chilson Funeral Home in Winsted, Minnesota.