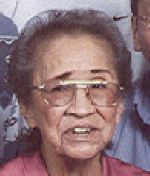 Juanita Florine Shindelbower, age 79, of Agency Village, South Dakota journeyed to the Spirit World on Friday, May 29, 2009 at her residence. She was born on May 20, 1930 in Sisseton, South Dakota the daughter of David Renville and Grace Robertson. She attended Catholic school and graduated from Flandreau Indian School. She went on to graduate from The Stewart Hairstyling School in Sioux Falls, South Dakota. Juanita was formerly employed as a hair stylist in Flandreau. She met James H. Shindelbower in Flandreau and they were later married. She eventually moved back to the Sisseton area. Juanita loved sitting at home with her cats and doing cross word puzzles while listening to Tom Wilson’s “Golden Oldies” on the radio. Juanita made it a point to call in someone’s birthday everyday. There was always somebody stopping by at her home for advice or just to visit. Her heart and doors were always open to anyone in need. She never asked or desired anything in return. But, if you feel you owe her in someway, don’t worry about it, just pass it along. There’s always someone in need everyday! Juanita also was a member of St. Mary’s Episcopal Church in Agency Village. Survived by a son: Mark Shindelbower; a daughter: Romy Shindelbower; grandchildren: Sean and James; two brothers: Jerry C. Renville and Harvey D. Renville; two sisters: Louise B. Jones and Violet M. Barse; many other relatives and friends. Funeral services for Juanita Shindelbower will be held on Tuesday, June 2, 2009 at 2:00 P.M. at The community Center in Old Agency Village, South Dakota. Officiating will be Sacristan John Cloud III . Special music by Butch Felix, Orval LaBatte and Jarred Lee. An all night wake will be held on Monday, June 1st beginning at 7:00 P.M. at The Community Center in Old Agency Village, South Dakota. Honorary Casket Bearers will be her family, friends and many relatives. Casket Bearers will be Justin German, Pat Deutsch Jr., Lucas German, Raymond Jones, Ephriam Redearth, David Barse, Tom Wilson and Harvey Renville Jr.