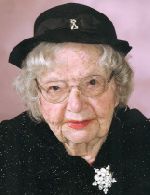 Josephine Mary was born on October 5, 1909 in Winsted to Charles and Josephine (nee Millerbernd) Guggemos.

For forty-five years she kept house for many priests (particularly Father Raymond Lang and Father Laurn Virnig) within several dioceses, including the St. Cloud Diocese. After retirement she returned her membership to the Holy Trinity Catholic Church from which she was raised.

Despite a handicapping injury to her hand, she excelled at knitting, crocheting, and sewing, all of which she enjoyed. Josephine (known as “Tootsie” by family members), also enjoyed babysitting her grandnieces and nephews. She was also known as the “Flower Lady” because of her love for flowers. She enjoyed raising plants (including evergreen trees), trading and giving new varieties of plants to her family, and to friends in St. Cloud. She was also adept at arranging flowers and enjoyed going to botanical gardens to see new species.

Josephine is survived by many nieces and nephews and their families. She was preceded in death by seven brothers: Joe, John, Arnold, Al, Gregory, Charles, and Eugene; and most recently by her sister, Elizabeth Weber.

Friends called at Church, from 9:00 a.m. until the start of Mass.