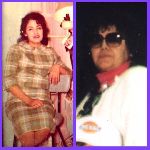 Josephine Louise LaBlanc Stephenson,age 78, made her journey to the spirit world on August, 25, 2017 in Minneapolis, Mn.
She was born in Sisseton, South Dakota on May 1, 1939 the daughter of Edward StJohn and Celeste LaBlanc StJohn. Her grandparents were Pete LaBlanc and Grace LaBlanc Wanna.
She is survived by her husband Tom Stephenson and one son, Micheal LaBlanc. Louise is further survived by seven brothers: Phillip, Robert, Rodney, Kenneth, Theodore, Roger and Jack. She also has two surviving aunts, Dolly King and Barbara Robbins; many other relatives and friends.
Her son Stacey LaBlanc preceeded her in death as well as special friend, Al Kells. She was also preceded in death by three sisters, Yvonne, Patricia and Jennifer as well as by five brothers, Marlon, Sanford, Edward, Timothy and Jeffery.