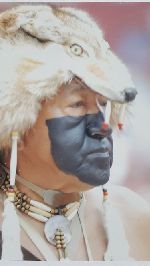 Joseph Leroy Lufkins Jr., age 79, of Sioux Falls, South Dakota and formerly of Sisseton, South Dakota Journeyed to the Spirit World on Monday, April 17, 2017 at his residence surrounded by family.
He was born on March 5, 1938 in Sisseton, South Dakota the son of Joseph Lufkins and Ellen Harris.
Joseph was a member of The Sisseton-Wahpeton Oyate and was formerly employed as a construction worker. He was an elder of the tribe and a men’s traditional dancer. He was his daughters and his grandkids biggest fan and attended many of their extracurricular activities. He loved sports from baseball to football to bull riding, he had them all covered.
He belonged to The First Presbyterian Church in Sioux Falls, South Dakota.
Survived by his loving wife: Julia A. Lufkins; a daughter: Jessica S. Hansen; six grandchildren: Damien, Hannah and Imara all of Sioux Falls, South Dakota; Mark Jr., Hunter and Diego all of North Dakota;a brother: John (Peggy) Redday of Sisseton, South Dakota; a sister: Gloria Nelson of Appleton, Minnesota; many other relatives and friends.
Preceded in death by his parents, a son Mark Lufkins and by brothers and sisters.
A traditional wake will start at 7:30 pm on Friday, April 21st at the Long Hollow district center with a Happiness Gathering at 10 am Saturday April 22nd.
Another Happiness Gathering will be held on Monday, April 23rd at 6:30 pm at the First Presbyterian Church in Sioux Falls, SD.
The Chilson Funeral Home in Winsted, Minnesota is serving the family. Online condolences may be made to www.chilsonfuneralhome.com