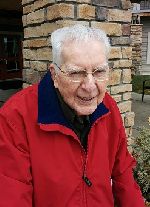 John W. Moebius, age 101, of Waverly, died Monday August 5, 2019 at Auburn Meadows in Waconia.
John was born May 7, 1918 in Watertown, Minnesota, to Fred and Margaret Padden Moebius, and graduated from Watertown High School.
John served in the U. S. Army in World War II.
John and Alma F. Conforti were joined in holy marriage November 10, 1945 at Our Lady of Refuge Catholic Church in New York.
After living and working in New York for 30 years, John moved to Roswell, Georgia along with the corporate office of the magazine publishing company where he was employed. After Alma’s death in 1997, John decided to retire and fish in Minnesota. John lived in Waverly for 15 years prior to moving to Auburn Meadows in Waconia in 2014.
John was an avid reader, renewed his driver’s license at age 97, and learned to use both email and the internet.
John is survived by daughter, Margaret and numerous nieces and nephews.
John was preceded in death by his wife, Alma; by his mother and father, Margaret and Fred Moebius; a brother Bill; and sisters, Lucretia Doerfler, Katherine Franske and Mary Mokrohisky.
A Memorial Mass will be celebrated at a later date.
Memorials preferred to a charity of choice.
The Chilson Funeral Home in Winsted is serving the family. Online condolences may be made to www.chilsonfuneralhome.com