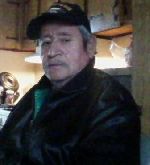 He was born on February 4, 1950 to Amos and Eva Weise in Red Lake, MN. He grew up in Beaulieu, MN with Tony and Margaret Timmer and family.

After graduating he enlisted into to US Army on August 30, 1968. He served two tours in Vietnam and then was sent to South Korea. Where he met his wife Yon Hwi Cho in Seoul, Korea and was united in marriage on April 13, 1977. When he returned to the United States he was stationed at Fort Lewis, WA. He was honorably discharged on June 24, 1984 with the rank of SGT. John was very, very proud to be a Native American Vietnam Veteran.

John enjoyed playing bingo, cards, listening to country music, playing on his computer, and having a good time with his friends and family. John also enjoyed making people laugh. He had a wonderful sense of humor. John loved hearing from and seeing his family and friends.

John will forever be loved and deeply missed by all who knew him!