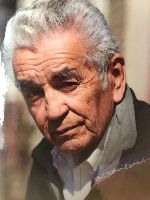 See below for info

John “Johnny” Allen Smith Sr. “Yellow Feather” (Waysagwonnabe), age 75, of Minneapolis Journeyed to the Spirit World on Thursday, November 3, 2016.
He was born on May 23, 1941 in Red Lake, Minnesota the son of Harry Smith and Isabelle Weise.
Johnny was a member of The Chippewa Nation in Red Lake, Minnesota. He was an accountant, barber, teacher, draftsman, counselor and business administrator. Johnny was formerly employed as a embassy director for The Red Lake Embassy-Twin Cities. He was known as a educator and advocate for the Native youth and community.
Johnny was a champion singer and grassdancer, husband, father, grandfather and great grandfather to many including non- relatives. Johnny known to many as Chief. He lived for singing and dancing. Most of his students come from this part of his life. Most of his career was spent tracking aspects of the Native American Culture.