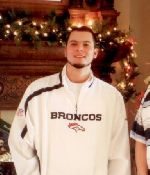 Jesse Ross Sander, age 27, of Lower Sioux Community Journeyed to the Spirit World on Friday, December 3, 2010 at his residence. He was born on November 17, 1983 in Minneapolis the son of Richard O. Sander & Brenda L. Pendleton. Jesse was employed in construction for his father at Sander Construction. Jesse enjoyed working with his dad! He was fond of his friends and family, crusin in his “Jag”, snowmobiling, fishing, grilling out, listening to music, shopping in malls, dining out at restaurants and he had a great sense of humor, always joking and laughing. Jesse loved life to the fullest! We were all truly blessed to have known him. Survived by his Parents: Brenda Pendleton of Lower Sioux and Richard (Sandy) Sander of Redwood Falls; siblings: Christopher Sander and Paige Kwestel of Lower Sioux, Stephanie Mathiowetz of Morgan, Chris Bengtson of Redwood Falls; paternal grandmother: Helen Sander of Redwood Falls; special friend: Roberta “Pop Tart” Pendleton; godchildren: Winterhawk Jr. Skylur Hawk Old Rock; uncles, aunts and a host of cousins.

All night wakes will be held on Monday, December 6th at 4:00 P.M. through Wednesday, December 8th until 1:00 P.M. at Bishop Whipple Mission on The Lower Sioux.