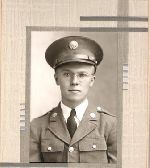 He was born on August 19, 1918 in Carver County the son of Clemens & Rosella Kieser Westrup.

Jerome honorably served his Country during World War II seeing action as combat infantry in North Africa and later in Central Europe where he served under Gen George Patton.

He worked in packing and shipping departments at several factories retiring after extended service at Advance Machine Company in Plymouth.

He was a faithful member of Holy Trinity Catholic Church in Winsted. He also belonged to The American Legion Post # 407 in Winsted where he was a member for sixty-five years and The V.F.W. Post # 9232.

Preceded in death by his parents: Clemens & Rosella Westrup, a sister: Adeline Snegosky, and by a brother: Medard J. Westrup.

A Mass of Christian Burial for Jerome Westrup will be held on Wednesday, May 15th at 11:00 A.M. at Holy Trinity Catholic Church in Winsted. Father Tony Stubeda will be the Celebrant.

A visitation will be held at The Chilson Funeral Home in Winsted on Wednesday morning, May 15th from 9:30-10:30 A.M.

The Chilson Funeral Home in Winsted is serving the family. Online condolences may be made to www.chilsonfuneralhome