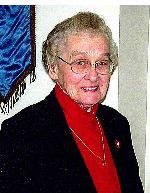 She was born on October 11, 1924 in Pearl Lake, Minnesota the daughter of Matthew & Frances Wicker Kunkel.

On May 4, 1950, Jeanette M. Kunkel and Leo A. Guennigsman were joined in holy matrimony at St. Timothy’s Catholic Church in Maple Lake. God blessed their marriage with eight children.

Jeanette was formerly employed at The Winsted Bank. She also helped on the family farm.

She was hard working, extremely compassionate, had a very strong faith and lived that by example. Jeanette was always positive, uplifting and non-judgemental. Family was important!
She enjoyed baking, making her own maple syrup, canning, gardening and always made a chicken dinner every Sunday. She enjoyed skiing, going on walks and shopping with her sisters. She also enjoyed dancing, going to shows, town baseball games and playing cards. She was quick to volunteer for the church or other community events.

She was a faithful member of Holy Trinity Catholic Church in Winsted. Jeanette attended Mass and prayed the Rosary daily. Christmas Midnight Mass the family never missed, except for one time in a bad snow storm the family started out, Jeanette said turn around “God will understand”.
She was a member of The National Foresters (Ladies only) and The Catholic Order of Foresters.

A Mass of Christian Burial for Jeanette Guennigsman will be held on Tuesday, October 9th at 11:00 A.M. at Holy Trinity Catholic Church in Winsted. Father Tony Stubeda will be the Celebrant.