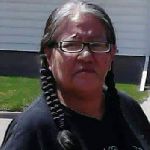 Janita Lynn Abraham, age 60, of Waubay, SD journeyed to the Spirit World on November 11, 2016 near Waubay.
She was born October 18, 1956 to Caroline Cloud and Pete Abraham in Sisseton South Dakota. She grew up in the Sisseton area and attended school at Tekawitha and graduated from Flandreau Indian School. After school Janita lived and worked in Aberdeen and later moved to St. Paul MN, where she lived for a number of years. Janita moved back to Aberdeen to be near her grandchildren. In 2016, Janita moved to Waubay after an accident and to be close to her mother.
Janita loved spending time with her grandchildren and took them fishing, ice skating, to the movies and singing in the car with them. She also enjoyed sketching, painting and coloring and spending time with her family and friends.