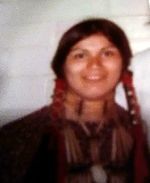 She was born on March 2, 1962 the daughter of Dennis J. Banks and Jeanette (Statley) Banks.

Janice was enrolled in the Leech Lake Tribe of Ojibwe and was raised into the AIM Community. She enjoyed spending time with a few close people. Janice danced traditional in her early years and had her own way of dancing through life.

Preceded in death by her parents; brother Roland Blanchard; and an infant daughter.