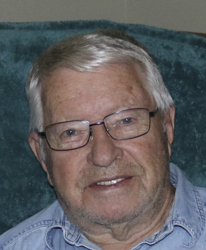 James Robert Paradis, age 90, of Winsted passed away at The Garden’s at Winsted in Winsted, MN. He was born in Redwood Falls, MN on August 14, 1931 the son of Eugene Paradis Sr. and Calvernia Johannek.

James Paradis and Audrey Sovell were united in marriage on August 2, 1952 in Marshall, MN. Their marriage was blessed with 4 sons; William, Thomas, Robert, and John. Jim was a retail grocer and meat cutter and owned his own grocery store, Jim’s SuperValu, in Winsted, MN. After selling the grocery store, Jim began his banking career at Winsted Community Bank, later known as Flagship Bank. He was an outgoing man who enjoyed helping people in the community along with spending time with his family.

He is preceded in death by his wife, Audrey on October 25, 2021; his parents; brothers, Eugene Jr and David.

Per Jim’s wishes, no services will be held at this time.