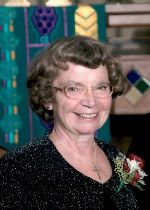 Jacquelyn Joan Marketon, age 79, Howard Lake, Minnesota passed away on Wednesday, September 6, 2017 at St. Mary’s Care Center in Winsted, Minnesota.
She was born on October 29, 1937 in Fairfax the daughter of Leo & Regina (Ecker) Jandl.
Jacquelyn attended St. Andrew’s Catholic School for eight years and The Fairfax High School for four years. She graduated in 1953. She then attended The St. Cloud School of Nursing and graduated as a registered nurse in 1958.
On June 20, 1959, she was united in marriage to Walter Francis Marketon who she loved! Their marriage was blessed with three sons Steven, Gary and Gregory.
They lived on Walter’s farm in Howard Lake and Jackie worked at The Buffalo Hospital.
Jackie and Walter were foster parents for many years to many children.
They enjoyed life together, traveled to many places like Austria, Germany, Switzerland and France with her parents. They visited relatives in Germany too. Jackie and Walter retired by Howard Lake in 1998.
They attended St. Mary’s Catholic Church in Waverly and helped at church also.
Survived by her husband: Walter F. Marketon; sons: Steven (Paula) Marketon of Howard Lake, Gary (Jill) Marketon of Buffalo and Gregory (Angie) Marketon of Rochester; four grandchildren: Amanda, Alyssa, Jessica and Isabel Marketon; a brother: George (Joan)Jandl of Eden Prarie; sisters: Virginia (Gary) Rogness of Rochester and Kathleen (Hilary) Bianchi of Nicollet; other relatives and many friends.
Preceded in death by her parents, an infant sister Jean Jandl, by a brother Jerome Jandl and by a sister Rose Mary Sadler.